Ariana Grande surprised her fans by posting some photos from her very intimate and private wedding ceremony.

Ariana and Dalton Gomez tied the knot recently in a private ceremony held at the signer’s home in Montecito, California. In addition to the photos she shared on social media, some new photos were also revealed by Vogue.

The ceremony was attended by not more than 20 family members and close friends of the couple. The magazine stated that Ariana wore a Vera Wang wedding dress which she asked the designer to do so years earlier. Vera made her an empire waist dress with a sculpted neckline for her big day. On the other hand, the groom wore a Tom Ford black and white suit.

For her jewelry, Lorraine Schwartz made a pearl and diamond earrings for the Grammy winner. She wore one of them upside down to symbolize the “upside down” moments that happened in her life.

Ariana also had an upside down photo of herself for her Sweetener album. She explained, “i showed aaron a photo and he was sitting opposite me and he said ‘i even love it upsidedown’ and that was kind of it for me at the time i had been feeling v ‘upsidedown’ for a while & the simplicity of that was like oh duh wow my bestie a genius. everything clicked after that.”

Rest assured though there’s no upside down about their wedding. Surprisingly, she walked down the aisle with her mom, Joan Grande and dad Ed Butera. This is opposed to the lyrics of her “thank u, next” song where she sang about holding hands with only her mama.

Meanwhile, Ariana’s house was transformed into the perfect wedding venue with flowers suspending from the ceiling while candles lit the whole room.

Ariana finally has her happily ever after! 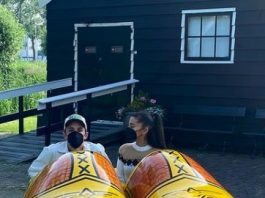 Ariana Grande and Dalton Gomez Pack Up the PDA on Honeymoon 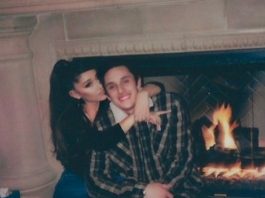