Kylie Jenner and her four-year-old daughter, Stormi Webster, flew to London to support Travis Scott on his sold-out show at the O2 Arena last August 6.

The KYLIE Cosmetics mogul documented the whole event on her Instagram on August 6. There was a picture of her and her daughter with their hands up in the air during the rapper’s performance and also took selfies together. One of the cutest pics she shared was that of their family group hug. Though Stormi was present, the couple’s son whom they welcomed in February, wasn’t around.

Aside from sharing snippets of Travis’ show, The Kardashians star also shared some behind-the-scenes at the event, specifically the things that happened in the backstage after the concert. She shared a video clip of basketball stars James Harden and Kevin Durant who were seen cheering on the rapper inside the venue after his concert. James Harden was Kylie’s sister Khloe Kardashian’s ex-boyfriend.

As Travis walked down the hallway, guests could be seen spraying him with bottles of champagne while the crowd cheered him on. Harden is also heard shouting, “Yes! Greatest in the f–king world…The biggest in the world!”

During the concert, Kylie wore a white t-shirt and acid wash jeans but afterwards, she changed into a denim mini-skirt which she paired with a red and white cropped motorcycle jacket. She completed her look with strappy, black heels.

As for Travis, he wore a red and white motorcycle jacket with the letter, “riders” on the back to match his girlfriend’s outfit. He paired it with white trousers and sneakers.

The rapper shared a photo of him and Kylie in the venue walking hand in hand and captioned it, “riders 4 life.”

This is the rapper’s first solo arena concert since the Astroworld Festival in November last year. He had his first public performance after the tragedy during the Formula 1 Grand Prix at E11even in Miami in May. Further, he performed at a Coachella party and in a pre-Oscar party as well.

Travis, Live Nation, and stakeholders of the Astroworld Festival faced 400 lawsuits after the incident. The parties were accused of negligence. Meanwhile, the cases were combined into a single civil lawsuit which represented almost 2,800 victims. 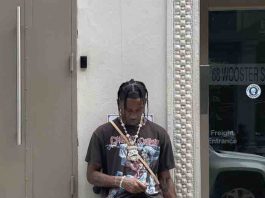 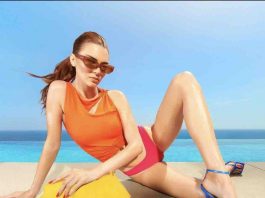 Is Kendall Jenner Ready to Start a Family with Devin Booker? 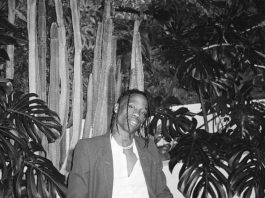 Travis Scott Back to Performing After Astroworld Tragedy