Emma Heming clapped back at those who’ve responded negatively to her “grief” following her husband, Bruce Willis’, aphasia diagnosis.

The model took to her Instagram Story on Wednesday to share, “When you’re not allowed to talk grief, self-care or being human in the world on grief awareness day….”

She added, “My gawd. But in the words of the great, philosophical, insightful Bruce Willis …

Moreover, Heming also included some screenshots of the hateful comments she got online. One social media user referred to her as a “drama queen,” and another couldn’t help but notice her and Bruce’s age difference. The troll commented, “When you marry an old man DECADES older than you are, you become their caregivers. That’s what you signed up for deal with it and stop complaining.”

Another user told her to “stop whining” because she’ll be “just fine” with the actor’s money. There was also one who described her as “annoying … victim attitude.”

In March, Heming shared her 67-year-old husband’s diagnosis by writing on Instagram that the “Armageddon” star has aphasia, which is characterized by difficulty in expressing and understanding speech.

She also shared on Tuesday to her Instagram followers, “This was the summer of self discovery—finding new hobbies, going out of my comfort zone and staying active.”

“My grief can be paralyzing but I’m learning how to live along side it.”

She concluded, “As my step-daughter [Scout Willis] told me, grief is the deepest and purest form of love. I hope you find some comfort in that too.”

The model has been very open about the importance of self-care. In addition to taking care of Bruce, she also has their daughters Mabel, 10, and Evelyn, 8. She told The Bump The Bump in May, “I don’t mother myself perfectly but I know that I have some basic baseline needs that are a must.”

“I put my family’s needs above my own,” she said. “That amount of care for everyone else within my household had taken a toll on my mental health and overall health, and it served no one in my family.”

She also mentioned, “I always wanted a family for as long as I could remember. If I had a vision board (which I don’t), family would be the center and everything else would filter around that. The girls bring so much love, laughter, and life into our home. For us as a family it’s always been about making memories. I’m not even sure we have rituals or traditions. We just love spending time with each other and we know that time is precious, and I don’t take that for granted.” 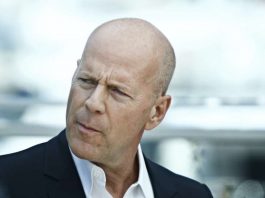 Bruce Willis Told to Leave Pharmacy for Not Wearing a Mask