Did Pete Davidson and Chase Sui Wonders confirm their romance during a PDA-packed trip to Universal Studios on January 19? The Bodies Bodies Bodies co-stars were spotted at the amusement part kissing and holding hands. Pete was wearing a navy coat, mint green hoodie, and bright orange pants while Chase was wearing a patterned pants in mustard yellow which she paired with a brown jacket.

The inseparable pair was caught on the attraction’s cam as they rode on a thrilling ride in the Revenge of the Mummy while holding hands. Based on the video published by TMZ, the 29-year-old alum got cozy with his 26-year-old co-star. In fact, he didn’t mind sharing a kiss with her in front of park-goers while they took an escalator.

This wasn’t the first time that the pair was seen stepping out together these past few months. The former Saturday Night Live host and the Genera+ion star, who played the couple David and Emma in Bodies Bodies Bodies, were also spotted in December at a New York Rangers game in the Big Apple with another co-star, Rachel Sennott. Further, the two were seen getting cozy in a booth while waiting for their order at an eatery in Brooklyn.

Pete’s latest outing with Chase came five months after he broke up with Kim Kardashian. The comedian and the reality star were in a romantic relationship for nine months before calling it quits. After that, the comedian was linked to model and actress Emily Ratajkowski. Romance rumors sparked between the two in November though they weren’t in a serious relationship.

Back then, a source close to the model told E! News, “Emily thinks Pete is a lot of fun to hang out with. She’s not exclusively dating anyone and is having fun.”

The King of Staten Island actor is famous for his celebrity ex-girlfriends. He was in a relationship with singer Ariana Grande and model Kaia Gerber. His exes also include actresses Kate Beckinsale and Phoebe Dynevor.

On the other hand, Chase was linked in April to Riverdale star Charles Melton. The two worked together in the short film, Wake, which was released in 2021. The two became Instagram official in July. However, the photo has since been deleted and they didn’t talk about their relationship status publicly. 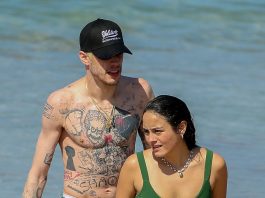 Kim Kardashian is known for her monochromatic style, and it also...